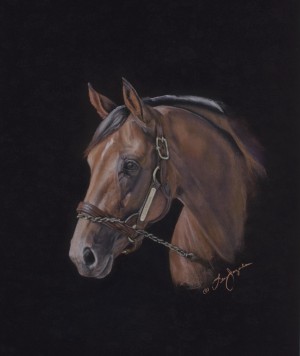 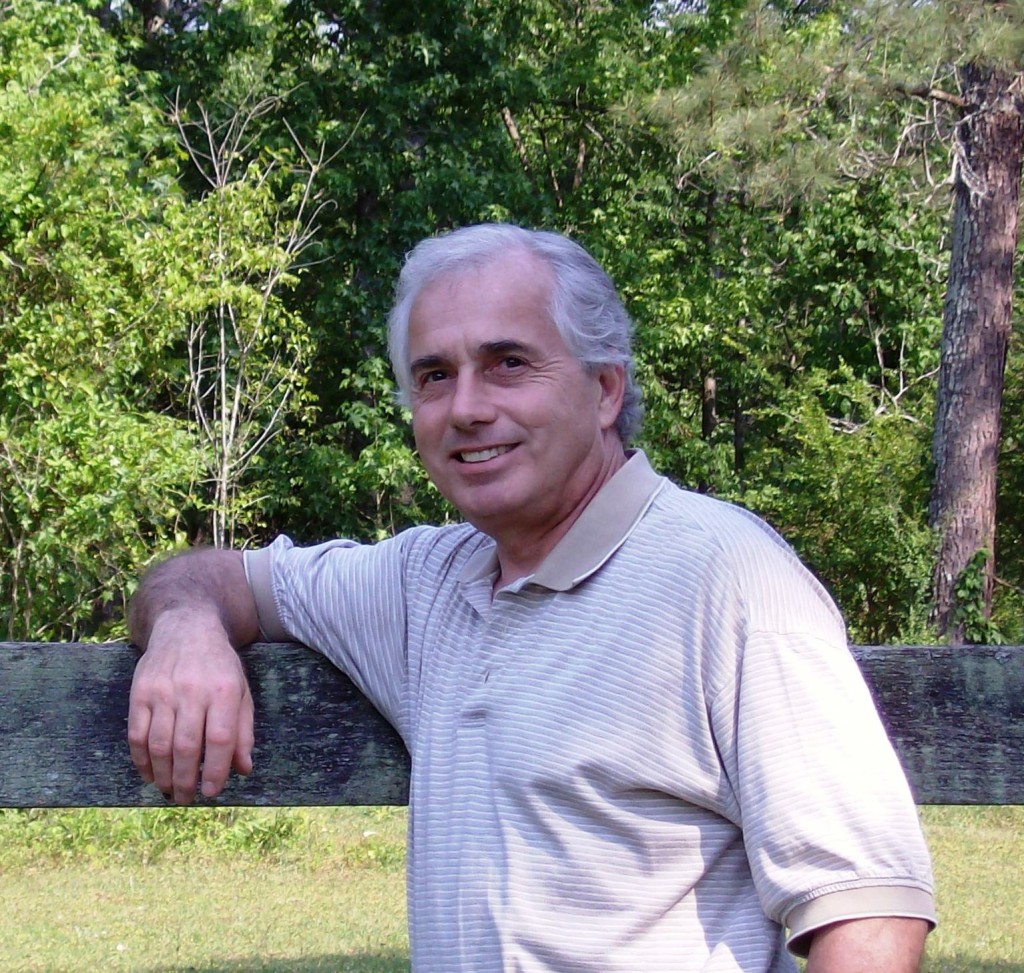 Leonard Jagoda lives in Georgia. His paintings can be found in private collections from Washington State & Texas to Saudi Arabia. His work hangs in some of the most prestigious stud farms in Kentucky.

He has received several prestigious awards for his work, and has been included in many juried shows, including the American Academy of Equine Art’s 2009 Fall International Open Exhibition. His portrait of Big Brown was juried into the 2010 International Exhibit of Animals in Art at LSU. Recently, he has been selected to create the official artwork for the 2011 Aiken Steeplechase. Since 2008, Leonard has been using PanPastel Colors in his paintings. 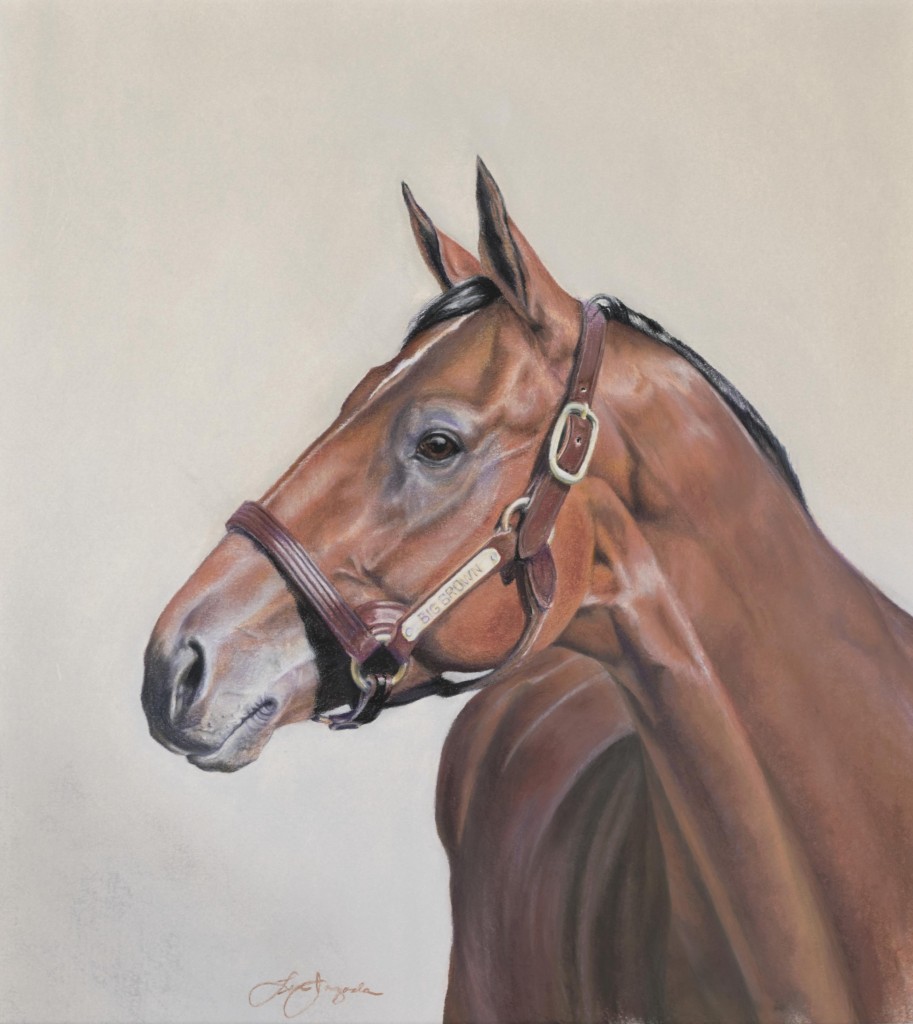 Note: For the paintings shown Leonard used PanPastel Colors, pastel sticks & pastel pencils. He paints on a variety of surfaces including Stonehenge paper & Canson Mi-Teintes. Click on any image to see it in more detail in a larger format.

Tell us about your background as an artist

Probably like most artists, I loved to draw at a very early age. My involvement with art was mostly an “on and off” thing in my youth.  Sports, dating, and various activities were a constant distraction, especially to an undisciplined person that did not have an art structure to work within. Interesting, while in grade school (maybe the 4th or 5th grade, I did a small sculpture of a man’s head (in retrospect it looked a little Cro-Magnon) but the teacher went wild over it. I will never forget that. Beyond an art class in high school, I did little more than occasional drawings and some painting and received the Art Award in high school.

I received a scholarship to the Cleveland Instituted of Art in 1966 but Uncle Sam came calling and I ended up in the Army. While in Basic Training and AIT, I earned beer money drawing portraits of soldier’s girl friends from wallet sized photos, but that stopped when I went to Vietnam. When I finally got out of the Army I returned to school on the GI Bill but majored in business (moving “eating” higher on my priority list); but, while in college, I did some pen & ink drawings and two of them ended up on the cover of the Chronicle of the Horse. That however, stopped abruptly when I got what some like to call “a real job”.

Business consumed most of my time, but I made time for horses and was heavily involved with them from the time that I got out of the army. Those experiences became valuable to me later when I returned to art.

I began my full time art career in 2007.  (I won’t reveal my age so you’ll have to do the math.) I am self taught, but by this time much more disciplined. My first year back, I limited my work to sculpture and drawing concentrating on form and values – the basics. I found that working in three dimensions really helped my drawing and believe that drawing is essential to other art mediums/methods.  I have moved on to pastels and hope to start oil painting as soon as I can take a workshop or class in the fundamentals. 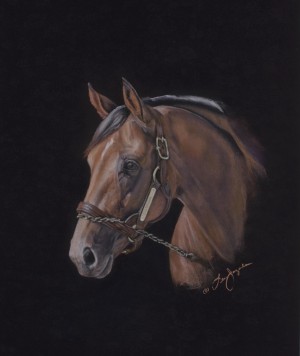 Tell us about your artwork

I concentrate on works depicting dogs or horses because I am intimately familiar with both animals and I love them both. I enjoy doing their portraits because they all have personalities and I try to capture that personality in a pose or what I call a “look” that reflects their character. They don’t “all look alike” and in addition, they each have their own character so I endeavor to capture both traits accurately. With works that show the entire subject (or three-fourths) I work to capture the excitement or sentiment of the moment and get the anatomy correct. 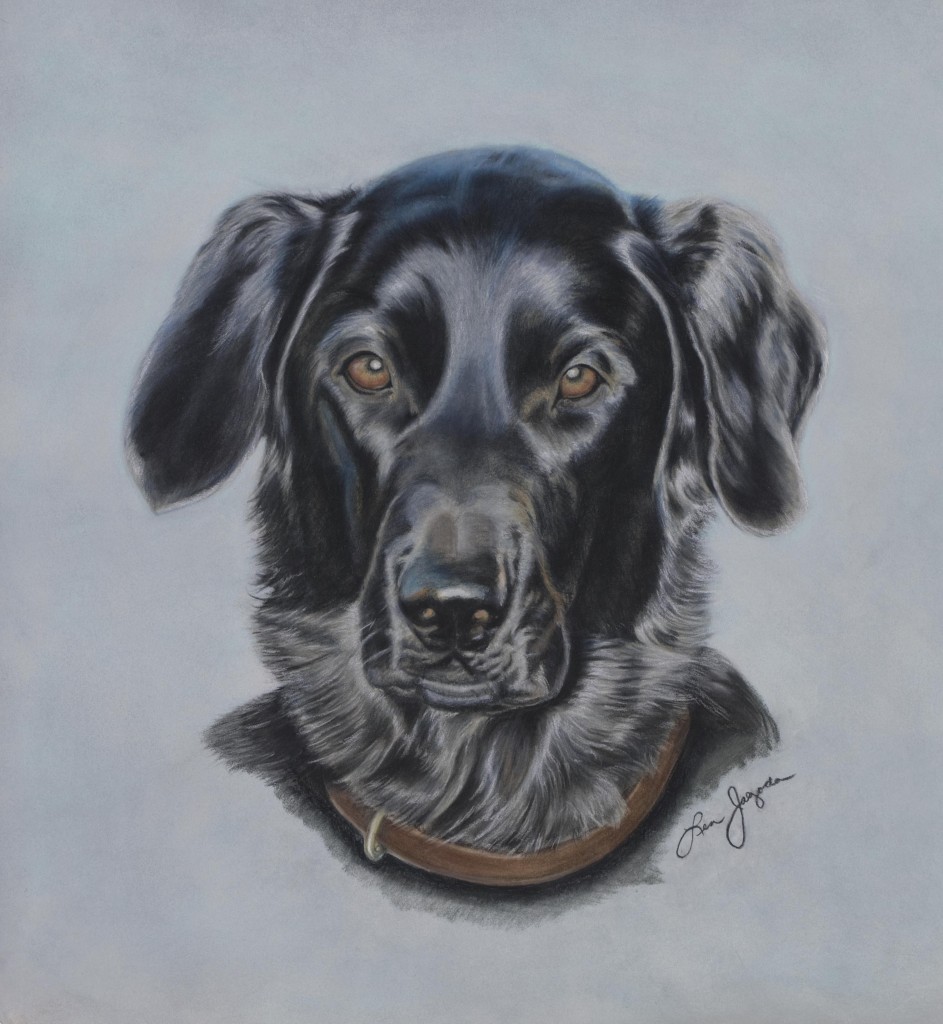 When I work in pastels (which has become 99% of my artwork of late) I layout the work in pencil first.  If it is a portrait, I try to position the eye first then sketch out the rest of the head. If it is a racing scene or field scene then it I start with the composition. For example, I am doing a large racing scene at this time. I took about 150 reference photos at an event knowing the direction that I wanted the subjects moving in the piece. I was careful to have the light source consistent in the reference photos so I positioned myself at certain locations and just kept shooting once the horses came into the view.  I selected three photos for the equine subjects and two for the background, then positioned the horses – modifying their size to give them location and depth in the painting and to create what I hoped to be an exciting scene.

Once the piece was laid out I took on each horse individually to get the anatomy in a little more detail, establishing what I call reference points to keep the horse and rider in perspective with each other and with the rest of the layout. Then it is a combination of pastels, sticks, pastel pencils and of course PanPastels. When and how I use each one depends on what I am trying to accomplish – but you should know that I work tight with a lot of detail.

When did you first begin using PanPastel Colors?
I did four pastel paintings before I tried PanPastels.  I did a commission piece – a portrait of a rescued dog named “Dodger” and used them on it to do the background, which was messed up in a couple of places. Trying PanPastels was a move of desperation, and I am so glad that I tried them.  That was in August of 2008.

How do you incorporate PanPastel colors in your work?
Since then (August 2008) I used them sparingly at first but soon realized that there were effects that I could only achieve with PanPastels that I could not do with any other form of pastel.  If you look at “Sabaskanova”, you will see one application right off: 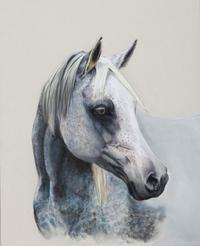 In “Stretch Run” (a racing scene) they were handy for large areas, underpainting and even “overpainting” to get a consistent tone over a lot of detail. 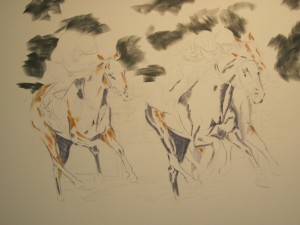 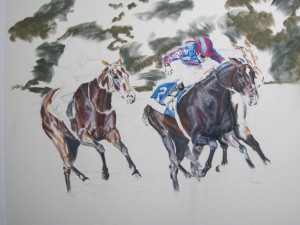 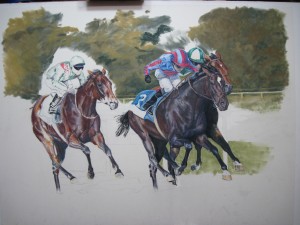 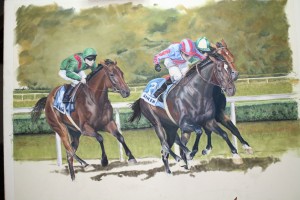 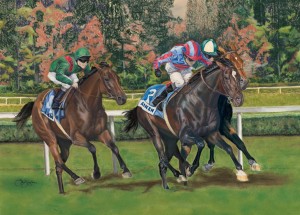 “Bluegrass Cat” is a good example of what I call overpainting. The horse turned his neck and there is a considerable amount of detail needed to show the muscles and creases in the skin/coat along with a strong blue shadow formed by his head blocking the light that would otherwise have made it to his neck. I worked a lot of detail into the neck then came on top, “painting” a pattern of extra dark red oxide with Pans. 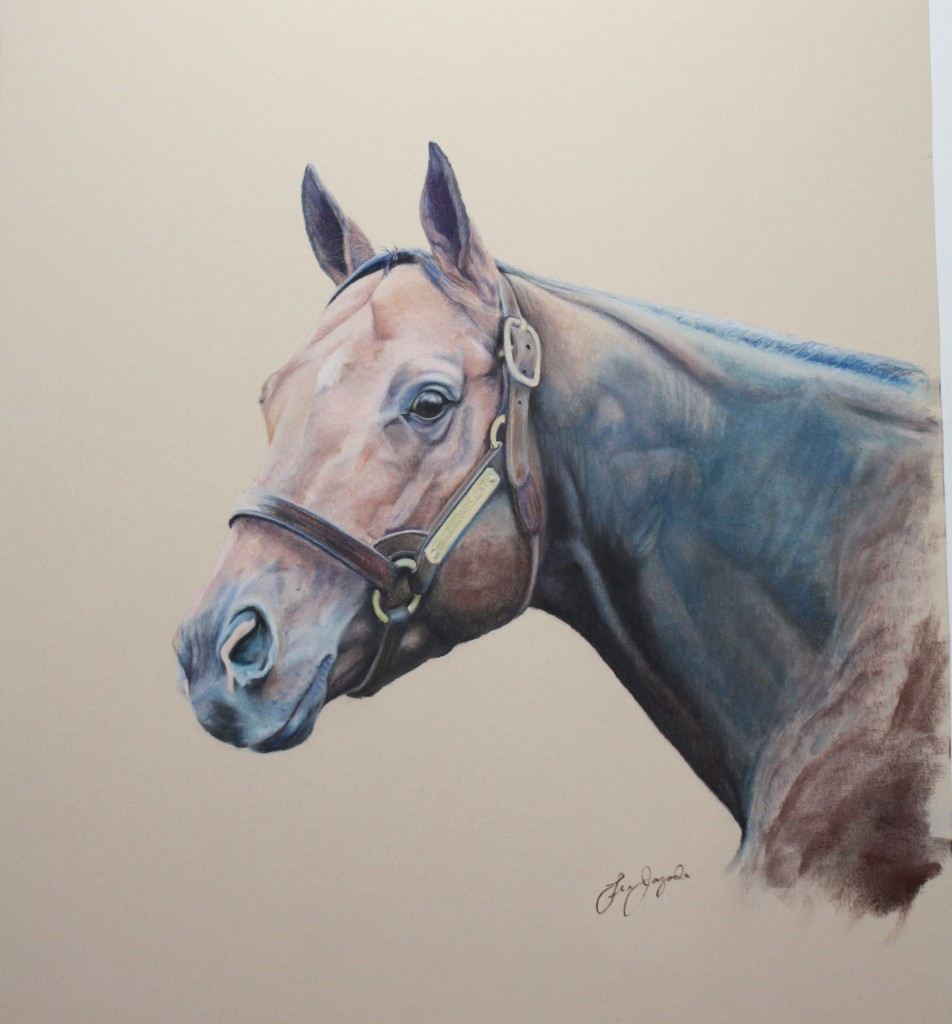 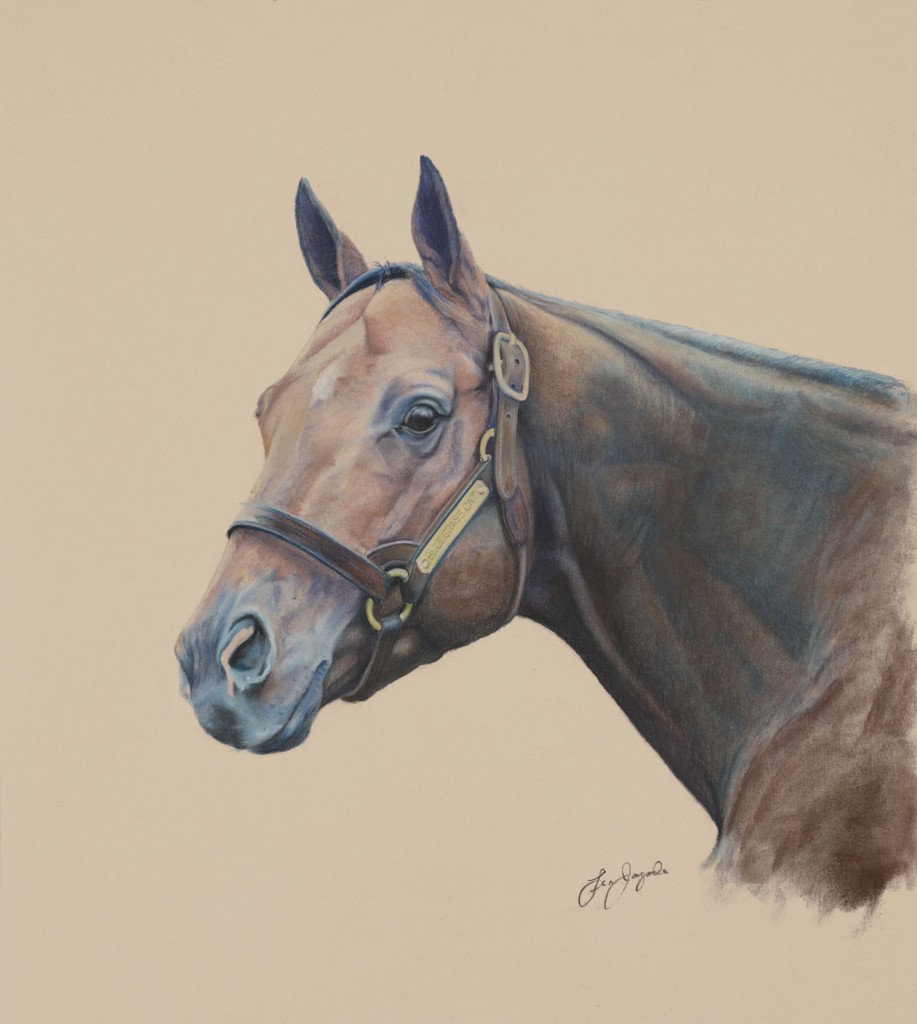 The detail and the blue came through the layer of Pans but the Pans brought the tone. It took a couple of days, maybe three or four to get all the detail in the neck. It took five minutes to do the overpainting with the Pans.

On my “Bullmastiff, (Butler)” I achieved a wonderful effect using Pans on his left shoulder that captured the reflective color and light. Very subtle and extremely effective. I am sure that area on this piece was a strong contributor to it receiving an award. 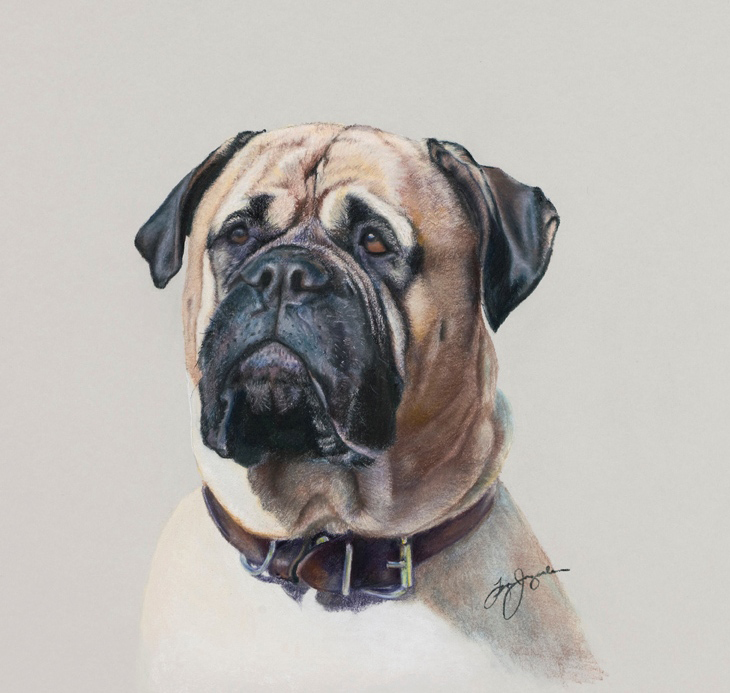 Are you doing things creatively with PanPastel that you were not doing before?
Absolutely. I discover new methods of using them all the time.  Sometimes I am thinking about a problem or an effect that I want to achieve and in the beginning I didn’t think of using Pan’s right away; now, I find myself thinking very early on, can I use PanPastel here?

What do you see as the benefits of using PanPastel in your work?
I already mentioned some of the things with PanPastels that you just cannot do with other forms of pastel. One benefit is being able to cover a large area with a consistent layer of color (or with broad strokes) very much like painting.  I find new benefits with almost every piece that I create.

Do you have any tips to give other artists thinking about using PanPastel?
PanPastel can broaden your “technique portfolio”.  They can also be very helpful to artists who tend to use hard edges and need to learn to soften edges effectively. Pan’s can make that happen and show you that the hard edge is not necessary – hard edges can be a bad thing. Having said that, I have created hard edges with PanPastel’s by using Colour Shapers and/or Clay Shapers. They are silicone tipped tools that look like pens or brushes with different shaped tips and you can use them to push the pastel or blend it using varying pressure.  A neat tool to have handy when you are working with Pan’s or even pastel sticks.  Especially useful for minute details.

Who / what are your creative inspirations?
I don’t believe in waiting to be inspired. I take on projects for a purpose or a commission and when I am not doing something that calls for a commitment from me, I do what I feel like doing at the time.  There are certain horses whose portraits I just want to do. At the moment my short list includes: Zenyatta, Exchange Rate, Curlin, Yes It’s True and Tiznow. I also want to do a foal kicking up its heels (which should be more marketable then any of the portraits) and I have a sort of family painting that is on the agenda (we had a horse that used to drink cokes out of the can).

What has been your most exciting moment so far, as an artist?
Not sure about this question.  Rather than “one specific moment” I would like to say, as it pertains to PanPastel, that when I turn to them (as long as I think through whether using them is a good choice for the task) they seem to give me better than expected results.

What is the most valuable lesson you have learned in your journey as an artist?
Never give up. The piece that may be just a mess could be one of your greatest learning experiences if you don’t give up on it. I think that when something like this (what you think is a total disaster at one point) happens and you find a way to resurrect it, it becomes one of your best works.

What are your artistic goals for the future?
Get at least one more piece accepted into an American Academy of Equine Art Exhibit and then apply for and be accepted to Associate Membership status with them.

More of Leonard’s work can be found at: http://www.backstretchstudio.com